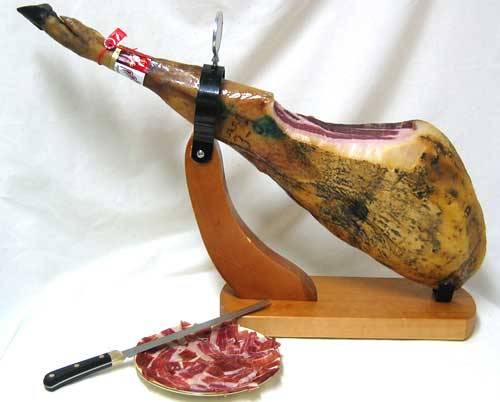 I feel like food is one of the harder things to translate exactly because boundaries of what’s what vary between countries and cultures. That said, I’ve heard a lot of Spaniards say “beicon” for things that I would consider to just be a flat cut of ham. Could you shed some light on this? Is “jamón” a different category? Also are there any other foods that have translation issues you can think of? Gracias!!

Hm. You are spot on about food being problematic. Let’s see if I can clear the fog.

There are two main kinds of ham. The first is jamón serrano (“mountain ham”), always taken from the hind legs of a pork.

This is the famous one. It’s really nice and the one most people are probably thinking of when they just say jamón. If the pigs are of raza ibérica (“Iberian race”), then it’s called jamón ibérico, which is telling of quality. If the pigs had a diet high in acorns, then it’s jamón de bellota, which is even better. And finally, if they are from the villages of Jabugo or Guijuelo, then it’s jamón de Jabugo or jamón de Guijuelo and it’s like really great expensive stuff.

Jamón serrano is awesome in bocadillos, by itself, or with pan con tomate (“bread with tomato”).

Bear in mind that jamón refers to both the whole leg of the pig (he comprado un jamón en la charcutería, “I bought a pork leg at the butcher’s”) and the ingredient (me gusta echarle jamón a la sopa, “I like adding ham to soup”) or the food itself (¿queréis que corte jamón?, “do you want me to cut some slices of ham?”). It’s not uncommon in Spanish houses to have a pork leg in a jamonero (the contraption to hold jamón) and cut some slices for eating and cooking from there:

The second type is jamón [de] York (“York ham”), also known as jamón cocido (“boiled ham”), which is the standard version of ham found around the world.

And that’s it for what constitutes jamón. Then from the pork belly you have things like panceta, which you can find in soups or in fabada. The grease part of panceta is called tocino, and sometimes these terms are used a bit interchangeably. If you smoke panceta, then it becomes bacon, but that’s not that common of an ingredient in Spanish cuisine (you’ll find bacon with eggs, as in the British/Irish dish, or in carbonara, and few places else).

So, though these concepts are different, maybe in the situation that you described you had something that did not register for the Spaniard as any kind of jamón, so they called it genericly as bacon.